In this blog, I am reviewing 1998 Toyota Camry 3.0i V6. It’s imported from Australia and sold in limited numbers in Malaysia. Due to the prohibitive road tax and High Fuel Consumption fear, Camry 3.0i V6 is a Rare model as 9/10 Camry sold in Malaysia were 4 cyl 2.2i model. Here’s the summarized article 2/3 is taken from a defunct Malaysian car magazine, Highway Malaysia, January 1998 issue.

Continuing on the theme of international styling and image, the new Camry is distinctive but not radical (ie. Won’t turn heads). The designer spent a great deal of time in the wind tunnel shaping the Camry to be as aerodynamic as possible. The outcome? A 0.30Cd of Co-efficient of drag. All surfaces, including the door handles have been kept as flush as possible and the corners rounded off. The front bumper is contoured to smoothly direct airflow around and above the car and airflow around the whole body is smooth and there are no protrusions to cause turbulence. The front and rear windscreens are bonded to the bodyshell, reducing the gap to just a few millimeters, while the side window glass is positioned as flush as possible which contributed to the low Co-efficient of drag.

The new Camry is a larger car than before, but somehow the new styling cleverly disguise the bulk. The wheelbase is now 2670mm, a generous increase OF 5mm which resulted the length extended to 4755mm, 30mm longer than before. The width is now 12mm more than its predecessor, while the overall height is now 9mm higher. 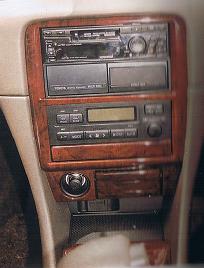 Due to the exterior dimensions increase, the interior space also increased and the level of luxury fittings improved significantly. There’s wood grain trim laced around the dashboard with supple leather upholstery. Both front seats are electronically adjustable with driver side having 6-way adjustable.


The odometer and tripmeter display are now in digital form. The Camry comes with many convenient features such as power windows with anti-jam mechanism, central locking with COBRA Alarm and Immobilizer. Also, it has additional 12v outlets. It has plenty of storage space with lockable glovebox, front door pockets, centre console box which doubles as armrest AND two Cupholders with dedicated lid. Rear passengers has great leg/head and shoulder rooms with space for 3 full size adults or 4 (YES 4!!!) childrens each with rear seatbelts and headrests
For the In-car entertainment, it came with Kenwood AM/FM Cassette with RDS and 10 disc CD-Changer at the boot with steering wheel remote control with controls the volume, station and tracks without taking the hands off the steering wheel.

The new Camry lays claim to being the safest Camry yet, exceeding all current and foreseeable crash test criteria for North America, Europe and Asian countries. Interestingly, it is 6 years ahead of tough Australian Design Rules of passive safety. All these were achieved with the help of Toyota’s in House GOA (Global Outstanding Assessment). GOA is claimed to be one of the strictest crash test criteria standards in the industry. For example, in frontal collision tests, the accepted European standard is 56km/h, but Toyota designed it for a higher impact speed of 65km/h.

The New Camry is the First Locally assembled Japanese car to have two front airbags as standard. The airbag system makes use of electronic sensors for fool-proof operation. The sensor is designed to determine the severity of the front collision and inflate the airbag(s) if exceeds 25km/h within milliseconds.

The brakes is equipped with 4 disc brakes system with front being ventilated. It has standard electronic 3 channel/4 sensor ABS. 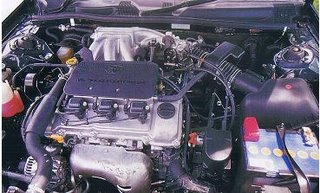 The heart of the new Camry V6 is not the same as the one in the previous generation (which is imported and sold in a small number in Malaysia). A major difference is that the engine is “ALL-Aluminium” and 40kgs lighter. It is said to share many of the same materials and design architecture as the Lexus LS400.

The timing of the 24 valves has been carefully set to ensure strong curve in the lower end of the speed range for responsiveness. The V6 engine delivers 134KW of DIN Power (183hp) at 5200rpm and 267Nm of torque at 4400rpm. It has 3 way catalytic converter and meets the current emission control standards set by the Malaysian Government.

Only a 4 speed Automatic transmission with Electronic controls is available. The new transmission has “intelligence” and is so clever that it does away with the previous “POWER/ECONOMY” Switch. An extra feature of the gearbox is a lock-up clutch which eliminates slip-induced power loss. Cruise control is a standard feature. For practical reasons, in automatically disengages whenever the brake pedal is depressed. It also won’t activate at speed below 40km/h.

The Camry has 4 independent suspensions with front being :McPherson Struts and coil springs, lower arms with stabilizer bar in a sub-frame mounting. The lower control arms of the front McPherson struts are forged in 1 piece for less weight and greater rigidity. For the rear, a dual link arrangement is used with McPherson struts and coil springs. It also has anti-roll bar in a sub-frame mounting (like the front).


My EXPERIENCE: BUT AND A BIG BUT. The suspension setting is SOFT, and tuned for comfort only. “Whacking corners” is strongly discouraged in this car as it will understeer easily and/or cause discomfort to passengers. If you loved to drive fast on corners or ZIGZAGGING between lanes, this car is not for you UNLESS you upgrade to harder springs/shocks. Instead, it is at home at Highways, driving at a cruising speed or high speed. In fact, 180km/h feels like 110km/h. Super quiet, super stable. It is designed for American roads (As it’s the best-selling car in America from 1998 to 2001) which consist mostly LONG, STRAIGHT roads. Ride comfort is FIRST CLASS akin to it’s sister car, the LEXUS ES300.

The rack and pinion power steering is perfectly weighted which gives the driver a good control feedback of the car… The smoothness was really amazing and the car is PHREAKING QUIET! Engine barely audible at idle and the noise only came alive after revving past 5000rpm!!! Top speed is electronically limited to 210km/h as it’s build in Australia, hence Aussie specs. A sensible guess is 225km/h without the limiter.

1) “Bought this car brand new from the dealer back in 02/1999. Owned it for 7 years now and has 105K miles on it. The only maintainance that I did was oil change, breaks after 80,000 miles, and tires and wipers of course. I sat down and I calculated how much this car cost me in maintaiance so far including oil changes and tires, It came up to $1900 in seven years. Very realiable and smooth until now. I am keeping this car until it stops although I am doubtful that this will ever happen. I am planning to get 300K miles out of it.” (OVERALL RATING: 9 / 10)

2) “If you want the most dependable car in the world, this may be your best choice unless you tend to get bored easily due to the lack of certain excitements.” (OVERALL RATING: 9.6 /10)

3) This is an excellent vehicle. I purchased this car new 6 yrs ago, and have had no problems with it. Currently it has more than 250K miles, and still starts up, and drives like the day I bought it. My father in-law says it drives and runs better then his 2002 Honda Accord. Even the leather and all other interior materials have held up. Over all this has been an excellent vehicle and I hope to put on another 150K miles before I sell it. (OVERALL RATING: 10 /10)

4) Having owned this car for about six years, I can say that reliability is one of its greatest assets. It is a beautiful car with a silky smooth powertrain and a terrific ride! Seating comfort is another big plus, and even the rear seats are surprisingly comfortable on long trips. Overall, a luxury car without the ridiculous price tag! This is definitely the best car I've owned! (OVERALL RATING: 10 / 10)

5) Great power from the V6, excellent 4 speed AT, typical Toyota, everything works as advertised. reasonable gas mileage at 25mpg. Have used for nearly 4 years and 57K miles. (OVERALL RATING: 9.7 / 10)

Woodgrain trim panels around the dashboard.

The first case study involved Honda and Toyota. Ever wonder why The New Vios outsold the City by 2:1 every month? Besides more aggressive marketing campaign (TV, Radio), sponsoring cars for Shell Fuel Economy Challenge, the MOST IMPORTANT reason is LOW Trade in of old cars for their new cars.

Case example, my Auntie was interested in fuel economical Compact family car. She wanted to trade in her Black 1999 Perdana V6 for a new car. She shortlisted her choice to City VTEC and Vios 1.5G as both within her budget. She prefer the more spacious City VTEC and wanted to buy, BUT and a BIG BUT, The Dealer offered RM32,000 only for her Perdana V6. She felt shocked over the LOW LOW trade in value. Next stop, UMW Toyota Showroom in Sec 19, P.J., The salesman in Toyota is Not only friendly but offered RM2000 Merdeka discount AND WAY HIGHER trade in value too. The dealer offered RM39,000 trade in price for her Perdana V6. To cut the story short, she ended up booking the Vios.

Case study 2: Ford and Honda. My friend is keen on buying a Compact SUV to replace his ageing 9 years old Toyota RAV4. He narrowed his choices to Ford Escape 2.3i and Honda CRV 2.0i. He visited both Ford and Honda Showrooms and test driven and compared both cars. The Escape wins on specifications (Leather, Large sunroof, electronic seats adjust, Bodykits, more powerful 2.3i engine from Mazda 6), and Price. His mind goes for the Ford, But being a fan of Honda, his heart goes for the CRV.

So Honda and other new car dealerships, the ball is on your side, buckle up and do something about your Trade in price of old cars before you lose your sales to your rivals... AND the the attitude (eg. friendly, prompt, helpful) of Sales Representative(s), Oh! And the financing as well especially the Interest rates and monthly repayments.
Posted by JeffersonL on October 09, 2006 1 comment: