Despite the almost limitless choice, the wealthy young men of the football world keep choosing the same cars: We round up the soccer elite's 10 most popular drives 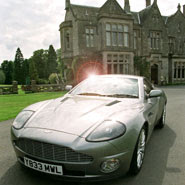 Second only perhaps to our great captains of industry, Premier League footballers are some of the most handsomely-remunerated people in the UK. Unlike those besuited behemoths of the boardroom however, soccer stars tend to have a great deal of leisure time in which they have little to do except spend their money on the most expensive things they can find. You can only live in one mock-tudor mansion though, which is why these elite sportsmen tend to focus much of their spending power on luxury motor vehicles. We’ve taken a look around the car parks at some of the top grounds and identified ten of the most popular choices.

1: BMW X5 (£47,525) The archetypal school run tank is an unexpectedly popular purchase, with soccer luminaries like Wayne Rooney, John Terry, Rio Ferdinand, Sol Campbell, Cristiano Ronaldo, and even old-timer Paul Gascoigne falling for its callypygian charms. The questionable handling has tripped up more than one driver though, with both Gascoigne and Rooney requiring the sevices of a panel-beater after having dented the sturdy Bavarian bodywork.

3: Mercedes McLaren SLR (£313,465) Looking a little more like a soccer star's car should look, the sleek if slightly overdesigned convertible is markedly lighter, faster and therefore more dangerous than the bulky 4x4s above. Despite the objections of responsible team coaches and anxious insurers its air of Gallic irresponsibility has still managed to lure Claude Makélélé and William Gallas. It's a vehicle that can't legally be used to its fullest potential on any public road, which is why we've found this clip of the SLR taking on its arch-rival, the Bugatti Veyron, on a track.

4: Aston Martin Vanquish (£166,000) The last of the old school Astons, the Vanquish took more than 396 man hours to build. Each car underwent around 2,000 stages of construction and used eight complete cow hides for the interior trim. Launched to mixed reactions in 2001, it's the car that tempted James Bond back from BMW with an endearingly silly role in 'Die Another Day' (Trailer here).Thierry Henry, Steven Gerrard and Welsh Wizard Ryan Giggs have all been spotted behind the wheel of a Vanquish, suggesting that perhaps it's not so invisible after all.

5: Aston Martin DB9 (£103,000) A modern classic, the DB9 is a prized possession of notorious short range strike specialist Frank Lampard as well as his Chelsea stablemate Glen Johnson. Despite being able to miss the net when he's standing inside it there's clearly nothing wrong with Frank's eyesight when it comes to spotting a good car. He's in good company: When Jeremy Clarkson reviewed a 2004 DB9 for us he signed off with the words "If you want a perfect car, you simply have to have a DB9". The Aston's timelessly elegant lines were described by another Sunday Times car expert, Andrew Frankel, as 'achingly beautiful'. Of all the cars on our list, this is the one that harks back most vividly to those halcyon days when footballers drove an E-type and dated Miss World because that's what looked best.

6: Bentley Continental (£110,000) The majestic Continental is part of the Premier League footballer's starter kit, along with free entry to Chinawhite, a niggling injury, and a cheap nylon shirt with a number on the back. Ledley King, Jimmy Floyd Hasselbaink, Kieron Dyer, Gary Neville, Jackie McNamara, John Terry and fiercely competitive Man City left back Michael Ball have all pushed this particular whip at some point in their careers, and it would be no surprise if talented youngsters practising in front of video cameras all over Britain have a toy one already installed in their trophy cabinet.

8: Porsche 911 (GT3 £72,750) The ubiquitous German sports car, in one or other of its innumerable variants, has found its way into many a mock-tudor garage. Thierry Henry has one, as do Louis Saha, Robbie Keane,and Lee Bowyer - The 911's deceptive placidity at high speeds lulled poor Lee into overstepping the limit in 2006, driving at speeds between 99 and 132 mph along a 70mph stretch of road in Morpeth.

9: Ferrari 360 (Around £80,000) It's surprising that so few footballers seem to have plumped for the pedigree Italian supercar. Kieron Dyer certainly has one of the low-slung thoroughbreds, as does Arsenal star turned national treasure Ian Wright. Perhaps the astroturf glitterati are buying them and just garaging them as an investment against the day when a younger, hungrier player replaces them in the team. After all, they can't all get picked for the Chicken Tonight advert.

10: Ford Ka (Around £4,425) Easily the most affordable entry on our list, and wisely selected by the young and eminently sensible Wayne Rooney. Along with a BMW X5, of course.
Posted by JeffersonL on November 28, 2007