SPECIFICATIONS: PROTON PUTRA and WIRA 1.8I DOHC (in bracket)

Back in 1996, Proton is on a roll having captured almost 70% of the sedan and hatchback markets. To keep this leading position, Proton is looking to enhance its vehicle sales further by entering niche markets. Proton had identified the market and it’s affordable sports coupe where the potential buyers were young hot blooded “boy racers”. The segment was once ruled by Ford Laser TX3 till the mid 90s. The car was officially introduced as Proton Putra. It is a 2 door version of the Mitsubishi Lancer.


Dimensionally, the overall length of the Putra (4230mm) falls between Wira Sedan and Satria, but it has closer relationship to the Satria by having the identical wheelbase of 2440mm and is shorter by 60mm than the sedan and aeroback.

For stopping power, there are disc brakes all round with the front being ventilated. Factory fitted ABS with 4 channel 4 sensor. Alloy rims are standard with 185/60R14 tyres. 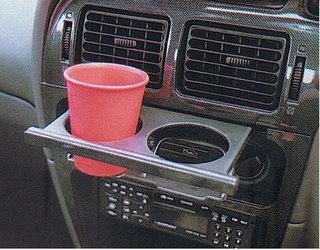 The Putra had the same dashboard as the Wira, but it came with cupholder, Momo steering and titanium effect “sticker” on the dashboard (see picture). The dash meters are the same as Wira 1.6i but with the speedometer right up to 260km/h and tachometer redlines at 7000rpm!


It also came with Recaro seats. The door being a coupe is wide and access to the rear is easy. Like most 2 door cars, the seatbelt anchor positioned too far back from the front seats and requires turning your back to reach the seatbelt. The seats being Recaros were supportive in the right area, not to firm, not too soft. The rear seat space is only comfortable for 2 (see picture) as the “transmission hump” renders the legroom useless for the “rear middle passanger”.


That’s all I can report. As I did not have the chance to drive the Putra as the car dealer won’t allow (I saw this Putra, totally stock year 2000 model Automatic priced at RM37,000). I am just a passenger in the car, the dealer just gave me a test ride in the car! The only thing I can comment is it’s a high-revving car with reasonable ride and handling (the car has stock 14” AAC rims with 185/60R14) with limited body roll thanks to the standard Recaro. Pickup is decent for an Automatic, 0-100km/h around 9.7 seconds.


To conduct a fair review, I"M PLEASE TO INVITE 2x PUTRA OWNERS TO WRITE A REVIEW HERE AS SOON AS POSSIBLE!!! I'D ALSO INVITE 2x OWNERS OF WIRA 1.8 EXI DOHC OWNERS TO WRITE A REVIEW. The following blog are the Specifications for both Putra and Wira 1.8EXI DOHC. Both are almost the same car, have the same engine, chassis, dashboard and near-identical performance. The differences are in dimensions and body style only.
Posted by JeffersonL on September 12, 2006 1 comment:

The Concept of this blog...

The purpose of this blog is reviewing used cars with specifications. The concept is it is going to be the interactive way!

I will kick start the review by giving my own impressions of a car and if I can’t give review, I’ll just upload the specifications and I want YOU!!! Visitors of this blog especially car owner(s) of the subject car to review the car by sending me the e-mail of your review and I will upload it… Don’t worry; I will acknowledge your work. But I will only post the 1st two reviews for non-national cars and 1st 4 reviews for National-cars in my blog…

EMAIL ME YOUR REVIEWS AT: otoreview@gmail.com

Oh! For Amateur Car reviewers only as the purpose of this blog is also showcasing the talents of amateurs only. Professional car magazine journalist(s) review(s) is/are discouraged.

I also invite reviewers of used cars from our neighbouring countries, Indonesia and Singapore. But this time I won’t start the review or post the specifications, YOU ARE ON YOUR OWN. You are free to post your reviews on any car + the specifications as well. Again, by sending e-mail of your review to me and I will blog it and acknowledge your work…

The format of the review is up to you, 7 page maximum (as seen in Ms Word). But must include elements on:

ii) Drivability@ On the road (include ride and handling, performance

iii) Ownership experience/proposition (eg. Maintenance, memorable experience with the car, what you add to your car++, AND would you recommend this car to other people?

v) Pictures are limited to 2 interior, 2 exterior and 1 engine.

NOTE: ++ => Please don’t give me the details of what you modify to your car. This is a used car review blog NOT a car tuning or modification blog. Just a summary of:

If possible DON'T need to cover "NON-essential" enhancements (such as In Car Entertainment (ICE), snake skin leather), or visual enhancements such as Bodykit/Paintworks (including Airbrush, 3k paint), etc… UNLESS YOUR CAR IS 100% STOCK w/o modifications and nothing to say in "ESSENTIAL" areas.

Posted by JeffersonL on September 09, 2006 No comments:

Email ThisBlogThis!Share to TwitterShare to FacebookShare to Pinterest
Labels: Concept of this blog, My original work, News and Announcements

The Honda NSX is probably Japan’s first and only world class supercar to date. It was Honda’s first attempt at the exotic-car segment characterized by low-slung 2-seaters, often mid engined and ultra-fast with the rarity and price-tag to match.

Starting on a clean sheet of paper, Honda dug deep into its Formula-one racing experience and utilize its talents of the best think-tanks to develop what they would have us to believe is the true blue supercar. The great Ayrton Senna is involved in fine-tuning the car which probably explained why the NSX were still on the market for 15 long years. Heard this car is produced in memorium of the late Ayrton Senna. If Ayrton had been alive I think we would by right offered the 3rd generation NSX since a typical Japanese model change is 5 years old.

The NSX rook over 6 years and unlimited budget to develop. The NSX were developed to rub-shoulders with Ferrari and Porsche. To maintain its exclusivity, only 25 units were hand-built at Honda Tochigi plant each day. The NSX looks 100% like supercar but without the limited visibility and the temperament. It was comfortable at home in highways as well as for town use. It is used as an everyday car by Gordon Murray, McLaren F1 designer

(The following paragraphs were sourced from the now defunct “Highway Malaysia, August 1994” issue by Lionel Seah).

Aluminium not only resist rust but it is extremely light as well. In fact the whole body shell weights only 210kgs. Even the double-wishbone suspension sub-frames are forged in Aluminium. The result? The NSX weights 1370kgs only. These figures may be common in Honda Accord but it’s definitely lightweight by supercar standards. In 1994, Honda produced an even more lightweight version called “NSX-R” as an answer to Porsche Carrera RS.

It achieved a maximum power of 274hp @ 7300rpm and a torque of 284Nm@5400rpm for the manual and 256hp@6800rpm for the automatic, the maximum torque for the Automatic gearbox is the same as the manual.

The power delivery of the car is wonderfully smooth and linear, the 0-100km/h is 5.2seconds for manual and 5.7 seconds for Automatic.

By supercar standards, the NSX is a quiet car, at cruising speeds the engine note is barely an audible whirr. The wind noise is well checked even at high speeds. To bring out the glorious addictive sounding noise, just rev the tacho needle towards the redline (at 7300rpm for the manual). 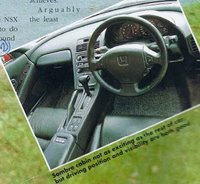 The environment befits that of an exotic car as you sit close to the ground, almost straight legged in wonderfully supportive all leather seats. The wonderful thing about the NSX is that there’s no claustrophobia that is typical in supercars. The cabin is plain (see picture), it looks at home in a Honda Legend. Thanks to good outward visibility (compared to other supercars) and generous shoulder room, the driving environment is ideal and with extra space to stretch.

Although there is very little storage compartments, the “boot” behind the engine (the NSX was a mid-engined remember?) car at the rear is enough for a pair of golf bags.

The European car critics may label the NSX as sterile and lacking in character but no one can deny that it is immensely user-friendly and so easy to live with even as an everyday car. It still has the necessary head-turning ability to qualify as a world-class supercar. It is a very civilized yet addictive car (when the VTEC screams at redline).

Note that Honda produced a very limited number of NSX type R in 1992 for Japanese markets. Major changes include a more aggressive suspension and an extensive weight reduction to 1230 kg from the normal NSX weight of 1370 kg. The NSX type R was very track oriented as it lacked sound deadening, audio, electric windows, and air conditioning in an effort to reduce weight. A second iteration of the type-R dubbed NSX-R was released in 2002 again exclusively in Japan. The NSX-R has a more aggressive rear spoiler and hood vent, along with various refinements to reduce weight to 1270 kg. Also it came with HiDs and etc...

Okay, I’m tempted! How much is a used NSX in Malaysian market today if there’s one on sale?

Being a “supercar”, the NSX is still exclusive and far from reach to the general Malaysian. It is still priced between 168k and 190k for a 1991 model today (averaged 180,000) depends on condition and the urgent-ness to sell the car. It is too pricey and at 15 years old is almost impossible to obtain car loan… Perspective buyer is typically rich and often will pay Cash for it…

Newer models add about 10% each year. Eleven years old is the oldest year to obtain hire purchase (loans) at low interest rates, the price will be around RM270,000 for a 1995 model.

Note that a brand new Imported NSX costs a whooping: RM1,107,485 OTR. Officially imported by Kah Motors back in 1994.

Posted by JeffersonL on September 04, 2006 No comments:

To ensure fairness or accuracy of the review on Peugeot 406, I will invite TWO 406 owners to review on their car (especially member(s) of the Peugeot Owners Club Malaysia). You just have to e-mailed me your work (suggested layout: Looks, Interior, Drivability, Ownership proposition - eg. experience owning it) and I will post it here. Oh! Also, 1 picture of the car exterior and engine bay. Don’t worry, I’ll acknowledge your work. Since I’m not an owner, I have no position to review the 406. However, I will share the Specifications of Peugeot 406.

(THE FOLLOWING IS SOURCED FROM “Highway Malaysia, April 97’ issue)

Posted by JeffersonL on September 02, 2006 No comments: