I, Jeff Lim would like to wish ALL MALAYSIAN Selamat Hari Merdeka ke 52 MALAYSIA! ( 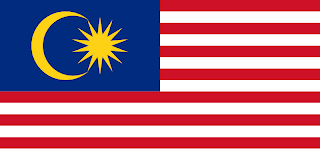 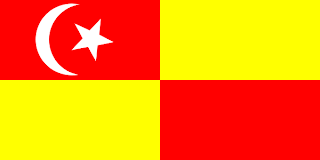 Other part of the World is Mourning... 31st August marked the 12th Anniversary of LADY DIANA SPENCER departure - the ill fated High Speed Paris Tunnel Car Crash which took her and her Boyfriend's Life. I was 18 at that time. Lady Diana's a very influential and noble person... I was very sad at that time...

That's all folks, thanks for having the patience to read this...

An original Jeff Lim's Production...
Posted by JeffersonL on August 31, 2009 No comments:

Email ThisBlogThis!Share to TwitterShare to FacebookShare to Pinterest
Labels: Anniversary, My original work 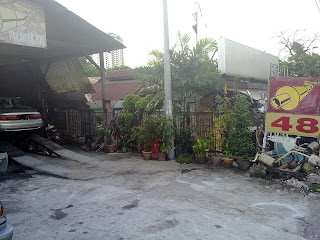 Today, I sent my Ford Telstar to the workshop as I taught there's problem with my extractor. 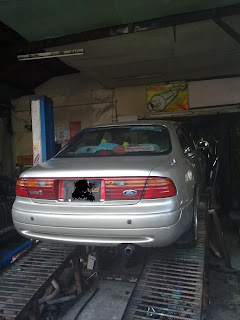 By just listening to the engine noise, he pointed out that it's the 2nd bullet (mid-rear) which needs changing. He recommended me 2x "MATOLA(R)" bullet to replace 1 "BIG" OEM Bullet. Total Price: RM260.

He allowed me to see how he cut off the old bullet and installing the 2 new bullets, one followed by another (small => big bullet) see photos later.

Well there's a saying, pictures worth 1000 words, here's some pictures... 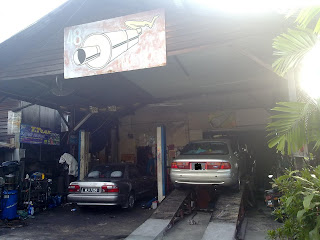 Above, before the work began. Below, Mr.Choo at work... 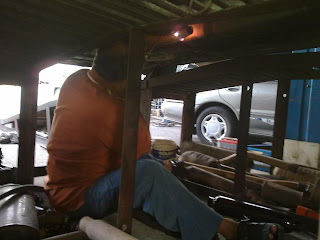 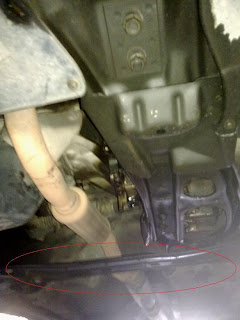 Above: The Telstar comes with Front lower anti-roll bar (Circled). Or is it after market?
Even the REAR suspension has anti-roll bar but I'm positive that's Standard OEM. 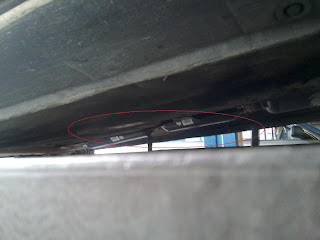 Above and below, After the work's done. 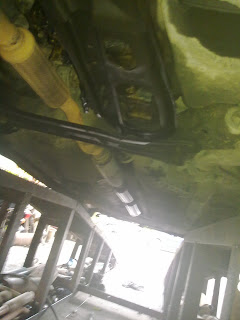 That's all folks, thanks for having the time and patience to read this... AN original JEFF LIM production. My Original work.
Posted by JeffersonL on August 29, 2009 No comments:

In this blog entry, I am updating my Ford Telstar i4 Ghia. This is the 14th update. 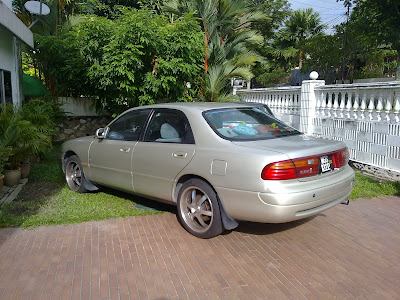 What's up in the month of August?

Well, lots of things to highlight. Firstly, the FUEL CONSUMPTION(FC)'s better (Latest figure: 10km/L) thanks to "3M Fuel injector Cleaner" which I bought for RM25 at "Brothers Kelana Jaya". What's the effect besides the Improvement in FC? 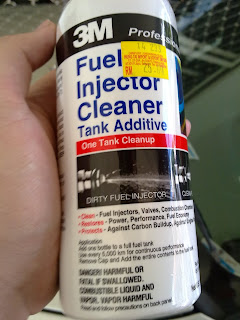 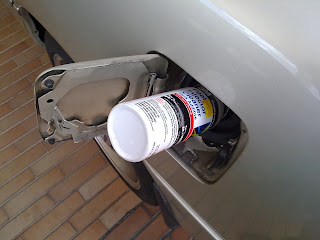 The Power delivery is more linear - less pressure on the accelerator pedal needed to get the car going, smoother and quieter engine (lower dB), better acceleration (0.4 secs improvement for 0-100km/h run). This contributed to higher highway speed and cornering speed (+10-20km/h) ability. Almost finished my 1st tankful as I am typing this, will fill-up again tomorrow to see the REAL difference in FC to be updated next month.


Good news, NO visit to workshop again this month though I bought my engine oil 2 days ago: Castrol GTX2 - Modern Technology for RM53 (See photo below). 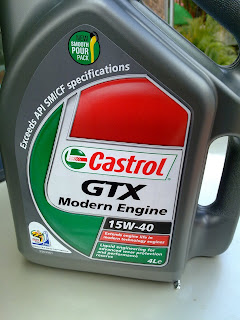 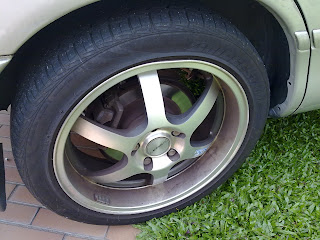 
Without further ado, here's the LOGBOOK: 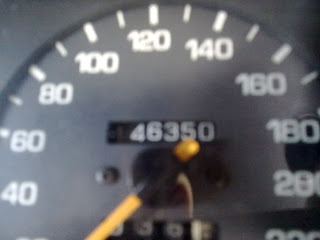 Before I go, here's a parting shot above taken at SS2 Mobil station, my LATEST FILL UP RM70, shortly after, I poured in WHOLE BOTTLE of "3M Fuel Injector Cleaner" into the fuel tank...


End of Update, thanks for having the patience to read it...

AN ORIGINAL JEFF LIM PRODUCTION (My original work)
Posted by JeffersonL on August 26, 2009 No comments: 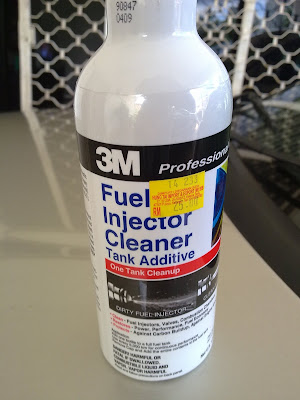 Last Sunday, I bought a New Bottle of "3M Fuel Injection Cleaner" worth RM25.00 in "Brothers Kelana Jaya". It is "MADE IN USA!". What can I say?

I did as instructed, Poured into my Telstar's fuel tank after Filling up with "MOBIL RON97 synergy".

The effect?
Again, WELL WORTH THE MONEY. One of my wisest investment. See next write-up Longtermer's report on my Telstar...

Well, pictures worth thousand words... Here's some for your viewing pleasure... 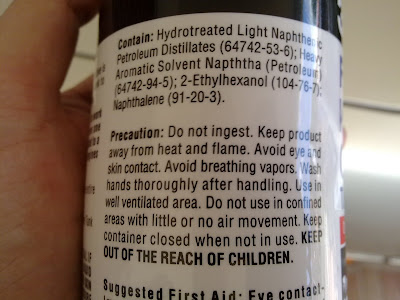 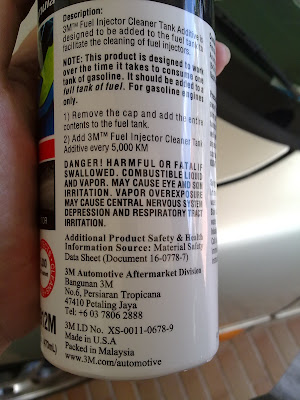 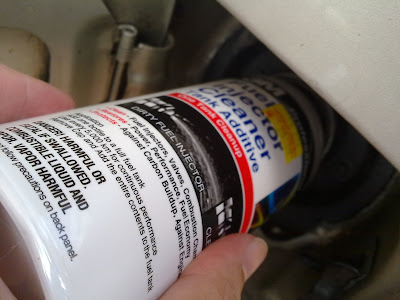 That's all folks, thanks for having the time and patience to read this...
Posted by JeffersonL on August 25, 2009 No comments:

SORRY for Inactive recently.... NO CAR/S to review besides a Wira....

To all fellow readers, sorry for being inactive recently. Why is it so? It's because I have NO car to review... That's why I NEED to review YOUR CAR... OR you write a review about your car and E-mail to me...

That's all folks, thanks for the patience to read this...
Posted by JeffersonL on August 17, 2009 3 comments:

Email ThisBlogThis!Share to TwitterShare to FacebookShare to Pinterest
Labels: My original work

Happy Birthday to me...

Today is my BIG THREE-ZERO birthday... How I celebrate? Who gave me gifts? Will update soon... In a meantime...

Well my earliest gift came 4 days before my birthday. It's from Honda Malaysia. Here goes: 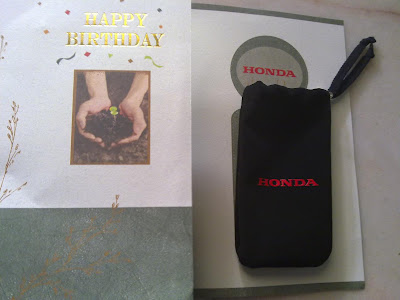 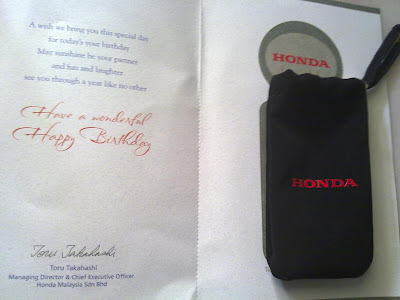 This is a follow-up from my earlier posting "Of double and triple parkers".
http://otoreview.blogspot.com/2009/02/of-double-and-triple-parkers.html

Today, I have 3 friends' whose car was blocked by double parkers. One of my friend was blocked by NOT 1 but 2 cars. Ie. triple parkers. To these offenders, please AT LEAST have COURTESY to leave your Phone no. in or at the front windscreen.

If you think it's "ALREADY MY HABIT", sorry, can't help it... Then I have a solution for you. It costs between RM9.90 to RM12.90 only and it's more presentable than "writing a note/paper", thus better than DOING NOTHING and simply double/triple park...

Here's a sample picture of my SOLUTION: 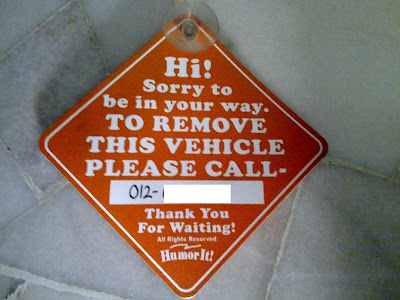 That's all folks, thanks for having the time to read this...
Posted by JeffersonL on August 09, 2009 2 comments:

In this blog entry, I'm going to follow up on what I wrote back in

Again, I proposed ROAD TAX based on insured value instead of CC (Cubic Capacity). Why?

Can you sense the irony in this 3 examples?

To ensure fairness, the Government should implement this proposal As soon as possible (ASAP) so that some Rich folks won't get away with the Loophole. It's SHOCKING, a 1796cc Mercedes E200K worth RM350,000 owner only have to pay RM3xx roadtax whie 1 20 yrs old BMW worth RM10,000 gets to pay RM10,000+ oad tax per annum. Something needs to be done...
Posted by JeffersonL on August 05, 2009 No comments:

This is NOT MY BLOG ENTRY Definitely. Rather, It was taken from this blog: Apparently written by "Yoon Kit" aka. drifter... Source 1: http://yoonkit.blogspot.com/2008/10/mental...ed-parkers.html
wyat forum.

I know this is a used car review blog, but these kind of driver is TOO MUCH. "Orang Kurang Upaya" (OKU) parking space also park. Somemore, parked at 2 parking lot. He/she knows it's a designated bay for OKU. Here goes for this WONDERFULLY WRITTEN Blog entry:

"While in McDonalds Shah Alam, this young scrawny punk drove his red sports car and parked in the middle of the two handicapped parking bays. So not only did he park in a space allocated for the Physically Challenged, he also took up two spaces for his precious car. I managed to snap a picture of him as he walked by: 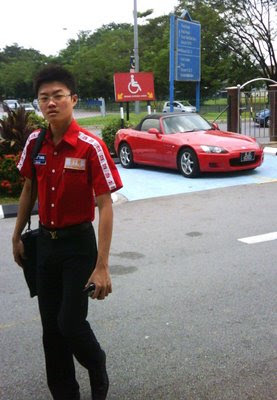 Me: Please don't park in the handicapped bay
Doofus: Huh?
Me: Are you physically challenged?
Doofus: No?
Me: Then why did you park there?
Doofus: Cannot ah?
Me: No!
Doofus: Who are you?
Me: Just a concerned citizen.
Doofus: So? ... Do what you have to do lah

Fine! So I took this picture: 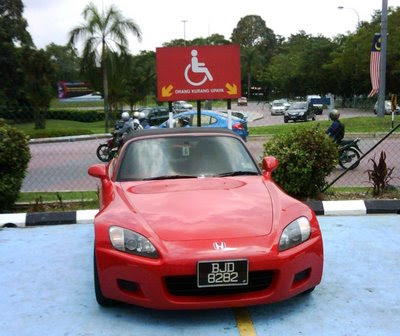